How much would you pay for The Universe? 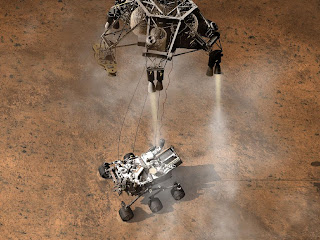 With the momentous landing of Curiosity on our sister planet Mars –  an unprecedented technological tour de' force by the NASA and JPL engineering & scientific teams – one can't but be left with a sense of the incredible potential we have when united in common purpose.

One cannot also but lament to this very same fact when looking across the world today and seeing so much of this potential locked into activities which do not serve our collective wellbeing and in many alarming instances actually acting to jeopardize our very survival.

With world-wide military expenditures ever on the rise, an economic system which rewards profit above all else, and a political structure hellbent on maintaining "the status quo" regardless of the inherent rationality & relevance of the institutions it protects, we seem to have lost touch with the real driving factors that create "value" in the deeper sense of the word – health, vitality, community, empathy, wisdom, knowledge – to name only a few.

Now that we are at the point in human history where we are able for the very first time to see ourselves as one connected species on one tiny blue-green gem floating through a vast sea of "nothingness", where is the logic of remaining divided along tribal, religious, economic & national lines where no such divisions – outside of our minds – in actuality exist?

How might we flourish as a species if instead of being in continual states of conflict & competition we united in the exploration of the unknown and directed our full creative powers for the betterment of all? What wonders may we unlock in such a shared empathetic vision and conversely what horrors are likely to be unleashed by steadfastly continuing to treat each other as adversaries?

With those questions at the forefront, these next two brief videos from astrophysicist & Director of the Hayden Planetarium, Neil deGrasse Tyson, boldly makes the case for the reinvigoration of our space programs and with it the much needed revitalization of our passions for exploration and the unleashing of the energies to triumph over the many obstacles which now stand before us.

We Stopped Dreaming – A New Perspective


If you wish to support the Penny4NASA organization or sign their petition hop here.

Challenges of Getting to Mars – Seven Minutes of Terror

View from the ISS at Night – Knate Myers