"A certain small income, sufficient for necessities, should be secured for all, whether they work or not." ~ Bertrand Russell, 1918 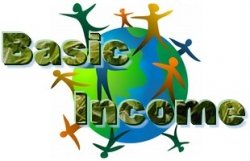 Imagine one day an envelope arrives in your mailbox and upon opening it you pull out the following letter:

As executor of the estate of [NAME OF LONG LOST RELATIVE HERE], we are writing to inform you of the unfortunate passing of your relative. As specified in the will and testament of [DECEASED RELATIVE'S NAME] you will henceforth be granted an income in an amount that will allow for the coverage of your essential living costs – food, basic shelter, medicine and other related health costs. This stipend comes with no strings attached and is a gift to do with as you may.

An account has been opened in your name and enclosed is a bank card that you can use to immediately access your first round of funds. At the beginning of each month your cost-of-living stipend for that period will be added to this account. Also note, your monthly payout will be adjusted over time to keep pace with inflation.

The Law Offices of Tobin, Samuelson and Galbraith

You take a closer peek into the envelope and lo and behold in it is indeed a bank card! After reading the letter several more times in a state of shock and with no small measure of distrust that this MUST BE SOME KIND OF SCAM, you call the number on the back of the card and after a few minutes on the phone with the representative do indeed verify the funds exist and are available to you. Still smelling a rat you contact the Offices of Tobin, Samuelson and Galbraith and after a lengthy conversation with the associate assigned to your case you indeed confirm to your elation the factuality of the letter's content and the lifelong gift you will be receiving.

If faced with a life-altering circumstance such as this what would you do next??? If employed would you quit your job? Maybe change jobs? Go back to school? Would you ever work again? Perhaps volunteer? Start a business? Just sit around and play video games for the rest of your life? Learn quantum physics? If you do decide to work – since after all the income you will receive will only grant a meager existence – how would knowing you always have this guaranteed income change the way you interact with your boss and fellow employees? Would your confidence level change? Be less likely to perform duties you dislike or find morally objectionable?

Now, expand this little thought experiment outward and imagine if this same income were not only extended to lucky you, but to every single citizen in society – with parents receiving half an adult's portion additionally for each of the children under their care. How do you feel this would alter the fabric of society around you??? Would everyone quit their jobs and thus bring the economy to a screeching halt? Does such an arrangement strike you as unjust since it would allow those who may be categorized as "freeloaders" take unfair advantage of those that do still go to work and apply themselves for monetary gain? Does the question jump into your mind how such a program could ever be funded – especially in the harsh light of the global economic meltdown we have been experiencing?

Well if such a program sounds like a fantasy, you may be interested in knowing the concept of an unconditional basic income (as it is called) is by no means a new idea and was raised long ago by individuals such as Thomas Paine, philosophers like Bertrand Russell, economists Herbert A. Simon, Friedrich Hayek, James Meade, Milton Friedman and many others.

Today, given the gulf separating the rich from the poor among other issues, the idea of a basic income is once again entering the public discourse. The subject is now in active discussion in the German Parliament*. In Brazil conditional basic income programs already provide vital life-sustaining resources to fifty million of their citizens*. If you happen to live in the U.S. state of Alaska you've been enjoying a basic income since 1976*. In addition, unconditional basic income pilot programs are currently underway and/or completing in Namibia as well as India – the both of which are raising tantalizing evidence into the potential flourishing such arrangements may unleash if widely adopted.

Regardless of how one may personally feel we may soon be arriving at a time – and as argued by individuals such as Jeremy Rifkin in his book, "The End of Work" – where we may have little choice but to enact basic income schemes, or facsimiles thereof, as a means to cope with the unremitting process of machines supplanting human labor at rates that may soon far exceed what can be absorbed by the emergence of new industries. As greater numbers are steadily pushed out the workplace door and into the unemployment lines by our more productive machine workers* – and thus being left without the wages to procure the goods to meet their survival – the "logic" of an economic arrangement that on one hand creates bounties of unprecedented magnitude while on the other denies an ever-growing portion of the population from that bounty is a system that is undeniably in a state of crises and one in desperate need of revision.

Will we all some day enjoy a basic income as a civil right? We shall see...

This 2008 German documentary – in English titled "The Basic Income – A Cultural Impulse" – lays out the mechanics and essential case for the adoption of unconditional basic incomes and provides an excellent overview for those who wish to learn more about this intriguing concept.

NOTE: For those who do not speak German, you can turn Closed Captioning on by:

This in-depth presentation at the BIEN (Basic Income Earth Network) 2012 conference delves into the remarkable results from a recently completed basic income pilot project funded by UNICEF in the Madhya Pradesh State of India.


News On One – Report on Basic Income Grant in Namibia

A brief report covering the promising results of an unconditional basic income pilot project in Omitara, Namibia as it was completing at the end of 2009.

This next presentation by Uhura Dempers further explores the fascinating results coming out of the unconditional basic income pilot programs underway in Namibia.


BIEN 2010 – Basic Income as an Instrument for Justice & Peace

And lastly, these final series of presentations at the 2010 BIEN conference discusses many other aspects of basic incomes. The first presentation especially by professor Philippe Van Parijs of the Université Catholique de Louvain being a must watch for those who remain skeptical about the viability and fairness such programs can offer.