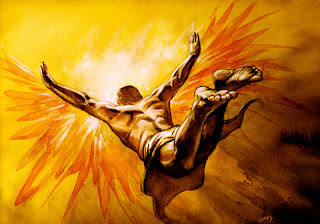 
Putting aside how appropriate or inappropriate it is to apply the term "intelligence" to humanity as it operates today, it is most certainly an open question whether we as a species have the wherewithal to overcome the confluence of threats which now loom before us or if grim pronouncements such as that made by Mr. Schmidt turn out to be prophetic.

We stand at a crossroads: On the one hand our "intelligence" has unleashed incredible technologies that have allowed our numbers to burgeon and offer the potential for a plenitude of further riches, but on the other those same technologies, coupled with a biological & cultural predisposition toward short-term decision-making, have unleashed terrible forces that now seriously compromise the very fabric of the delicate & intricately interwoven life systems of the Earth.

Are we like Icarus, smart enough to take to the skies, but so blinded by avarice that we climb until our wings are incinerated by the fires of the Sun or will we find the wisdom to steady our course and come into balance with the natural limits this small finite world is capable of providing us?

This next 2011 documentary inspired by the best-selling book, "A Short History or Progress" by Ronald Wright and executive producer Martin Scorsese asks the deep question. What is progress? ... and just where might it be taking us.


NOTE: If your browser does not support the documentary above and you happen to have NetFlix you can stream it in HD by going here.
Posted by Brian at 1:30 AM

Email ThisBlogThis!Share to TwitterShare to FacebookShare to Pinterest
Labels: Our Unfolding Science, The Status Quo