On October 27th, 1962 during the peak of the Cuban Missile Crisis the aircraft carrier USS Randolph and eleven other accompanying destroyers detected near cuba the Soviet Foxtrot-class submarine B-59 whose mission was to support the Soviet delivery of arms to Cuba. At the time of this encounter the submarine had not been in contact with Moscow for severals days, and although earlier had been picking up US civilian broadcasts, in order to evade the American carrier group dove too deep to monitor any radio traffic.

Unbeknownst, to the United States Navy (USN) this particular submarine in addition to its 21 conventionally armed torpedoes contained one more torpedo armed with a 10-kiloton nuclear warhead. By way of comparison, Little Boy – the bomb dropped on Hiroshima – was 15 kilotons.

At this time, the US vessels began dropping practice depth charges (with low energy explosives), in an attempt to force the B-59 to the surface for positive identification. Messages from USN that practice depth charges were being used however never reached the submarine, nor it seems Soviet naval headquarters. One of the crew, the signals officer Vadim Orlov, described the scene: "The [depth charges] exploded right next to the hull. It felt like you were sitting in a metal barrel, which somebody is constantly blasting with a sledgehammer. The situation was quite unusual, if not to say shocking–for the crew."¹ The temperature rose sharply, inside the engine room especially. The sub then went dark, with only emergency lights functioning. Carbon dioxide in the air reached near-lethal levels barely allowing the crew to breath. Orlov continues: "One of the duty officers fainted and fell down. Then another one followed, then the third one. . . . They were falling like dominoes. But we were still holding on, trying to escape. We were suffering like this for about four hours." Then "the Americans hit us with something stronger. . . . We thought–that's it–the end."

The captain of the B-59, Velentin Grigorievitch Savitsky, unable to contact the general staff and feeling his back was against the wall ordered the officer in charge of the nuclear torpedo to prepare it for battle and is quoted as shouting, "Maybe the war has already started up there, while we are doing somersaults here. We're going to blast them now! We will die, but we sill sink them all–we will not disgrace our Navy." 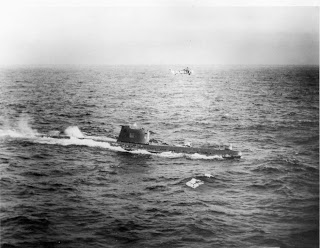 Of the three primary officers on board – all of which whose unanimous consent was required – the political officer, Ivan Semonovich Maslennikov, also concurred with Savitsky to launch the warhead. Fortunately however, the third and remaining officer, Vasili Arkhipov (pictured above) stood in opposition and eventually persuaded captain Savitsky to surface the submarine – plainly visible to the U.S. fleet – and await orders from Moscow.

Had Arkhipov not been the wise person he was and instead agreed with his fellow officers on that fateful day and launched their torpedo – destroying themselves, the USS Randolph and accompanying destroyers – given the hair trigger status of both the Soviet and United States militaries, it is almost a foregone conclusion that a full nuclear exchange would have occurred.

If this bit of history is as new & shocking to you as it was to me, you may be equally shocked to learn of the incredible and predominantly untold chain of events that led to that spine-chilling day in 1962 as well as those that have followed all the way to the present. Was the Cold War between the Soviet Union and the United States inevitable, especially in the light of both countries being allies during World War II? Did the U.S. have to drop The Bomb on Hiroshima and Nagasaki? How has the many decades of mutual distrust affected the way we view one another and framed our social &amp political narratives – both domestic and in relation to how we have treated the many nations & peoples throughout the world?

To garner a deeper & clearer understanding into these questions – and many more – this next gripping ten-part documentary series from director Oliver Stone opens before us a view of history that has until now been obscured by officialdom and which today is of critical importance to be understood if we are to come to a more peaceful, thriving & enlightened world view.

¹ This quote and those following excerpted from the book, "The Untold History of the United States."


The Untold History of the United States

NOTE: While playing these episodes from Disclose.tv if any of these videos stop and stutter from inadequate download speed pause them for a bit and they will buffer up enough for smooth playing.

Unfortunately I can't seem to find a version of episode 5 at the moment on the web. If anyone out there happens to locate one I can embed please leave me a note in the comments. Thank you!

Unfortunately I could not locate an embeddable version of this episode either. If anyone knows where  I can find one please let me know by commenting below. Thanks again!

If you enjoyed this series and would like to dig further into the many incredible events throughout this period of American history, pick up a copy of the companion book to this documentary: 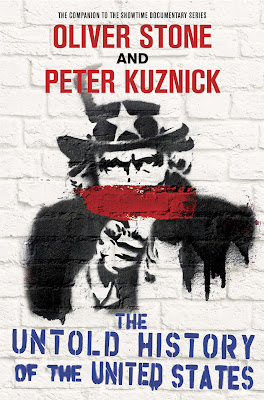