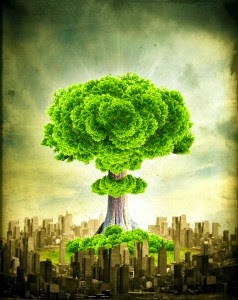 According to the Food and Agriculture Organization of the United Nations as of 2012 at least 870 million people in the world suffer from chronic undernourishment. Compared against the world population, this is greater than one person in eight. Though progress in reducing hunger has been made from the early 1990s, since the 2007 global economic meltdown this positive trend has disconcertedly slowed or come to a standstill and in many regions most hard hit reversed.

Though current agricultural yields across the world today if equitably distributed are enough to feed the entire world population – with their inequatable distribution according to worldhunger.org resulting from "harmful economic systems" or according to University of Guelph, Canada Professor Emeritus of Philosophy John McMurtry: a metastasis of "private money-sequences self-multiplying out of control with no productive function."* – with continuing rises in population (estimated by the U.N. to reach 9.5 billion by 2050), ongoing degradation of arable land, increasing water shortages, unsustainable fossil-fuel intensive farming practices and Climate Change, it is becoming clear to growing numbers of scientists, environmentalists, farmers and others that humanity will need to revolutionize its means of food production if we will have any hope of meeting rising demands and doing so in a manner that does not catastrophically undermine the biosphere.

So what can we do about it?

Fortunately & enticingly, new emerging technologies in hydroponics, aeroponics, aquaponics, indoor, rooftop and vertical farming now offer to the whole of humanity the potential for a literal cornucopia of locally produced environmentally-sustainable organic food that require zero pesticides, can be grown with a small fraction of the water that current industrial methods use, do so 365 days a year and at practically any latitude.

With these technologies – and the collective will to transcend the artificial scarcity induced by our current economic assumptions & competitive-based mindsets – world hunger could in very short order be entirely eliminated while simultaneously resolving the cacophony of food-related illnesses that are born by our now dominant pesticide-laden monocultures (increasingly composed of GMOs) which are produced by our multi-national agribusinesses for the maximization of profit over health.

Given the massive benefits the whole of humanity would enjoy & the untold lives saved are there really any legitimate excuses for not pursuing these new production methods with the full resources our world governments & industries can offer?

* From the book, "The Cancer Stage of Capitalism: From Crisis To Cure"


CNN – A Farm On Every Rooftop


Farming Beneath a Dome


Plantagon – The Future of Urban Food