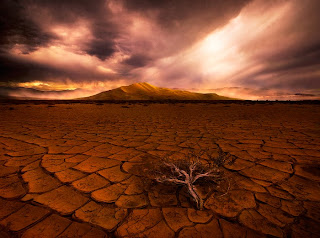 252 million years ago ninety-five percent of all species on Earth went extinct.

Referred to as the Permian Mass Extinction, the reasons for this catastrophic period in our planet's history was until very recently a complete mystery.

Fortunately, however through decades of dedicated research by scientists across the world in 2000 the puzzle was finally cracked and with it the discovery that the death of most life on Earth was not triggered by a single event such as the asteroid impact that killed off the dinosaurs 66 million years ago, but instead was the result of the interplay of two independent but inexorably interconnected killers that together turned most of the Earth's surface into a desert wasteland and rendered vast portions of the oceans hostile to marine life.

So why should we concern ourselves with this event from so very very long ago?

Well it turns out of the two Permian killers that caused so much devastation one is still with us today. Lurking deep in our oceans and locked in the permafrost soils throughout the colder regions of the world this Kraken lies in wait ready to unleash its poisonous effects if stirred from its precarious slumber. Though the ancient partner of this tempest is long gone, unfortunately it looks like humanity – through our current indiscriminate actions – are rapidly taking the former's place and may already be unleashing this nemesis from its frozen chains and in so doing delivering us and all other life on Earth into a deadly embrace.

For more information go to LastHours.org.

... and to learn about the fascinating discover of the Permian Mass Extinction see this next fantastic BBC documentary...

First there was The Story of Stuff, then The Story of Broke and now we stand at a momentous fork in the road. Do we keep playing the "Game of More" until we've completely exhausted the resources of planet Earth and collapse OR just maybe is it time to rewrite the rules that currently tether us and boldly strike out in the pursuit of something better?


The Story of Solutions